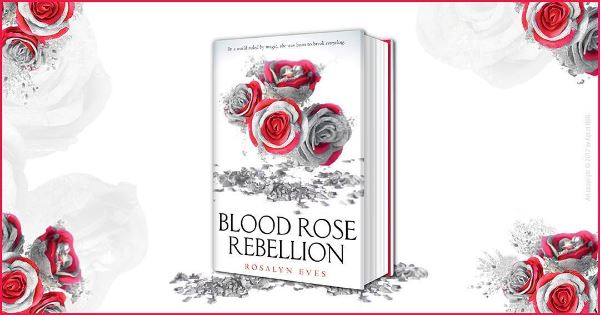 I want to wish the happiest of [belated] book-birthdays to this incredible first novel in an exciting upcoming trilogy! It became available this past Tuesday, March 28th, and I cannot wait for other readers to get their hands on it! This book is a beautiful historical tale about a young woman who doesn’t fit into 19th century England because unlike those around her who wield magic and possess the power to create and change, her powers are dark and destructive. 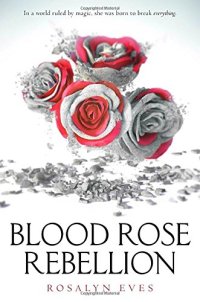 Title – Blood Rose Rebellion
Author – Rosalyn Eves
Length – 416 pages
Genre – YA, Fantasy
Pub. Date – March 28, 2017
Summary – Sixteen-year-old Anna Arden is barred from society by a defect of blood. Though her family is part of the Luminate, powerful users of magic, she is Barren, unable to perform the simplest spells. Anna would do anything to belong. But her fate takes another course when, after inadvertently breaking her sister’s debutante spell—an important chance for a highborn young woman to show her prowess with magic—Anna finds herself exiled to her family’s once powerful but now crumbling native Hungary.

In Hungary, Anna discovers that nothing is quite as it seems. Not the people around her, from her aloof cousin Noémi to the fierce and handsome Romani Gábor. Not the society she’s known all her life, for discontent with the Luminate is sweeping the land. And not her lack of magic. Isolated from the only world she cares about, Anna still can’t seem to stop herself from breaking spells.

As rebellion spreads across the region, Anna’s unique ability becomes the catalyst everyone is seeking. In the company of nobles, revolutionaries, and Romani, Anna must choose: deny her unique power and cling to the life she’s always wanted, or embrace her ability and change that world forever.

I was really excited about this book when I discovered it online, 19th century England (and the rest of Europe, really) has always been of interest to me! Rosalyn Eves has weaved an intriguing story about a young girl who is struggling to find her place in the world because of how “different” she is. I put that in quotations because different in this book means to be magic-less, and this is just my opinion but it’s also the willingness to be brave and stand up for your beliefs, fighting battles that may not be won because you know that there’s more to the world than a controlling government (the Luminates) and people telling you that you can’t do something.

Gah, so I may have fangirled a little hard there BUT it’s true! There’s a lot going on in this book and the main character, Anna Arden, is such a spitfire. I thought that the story was great from the start, although a little vague as to the situation with Anna. That seems to be the point though as you read on, you learn more about her past as well as her family’s involvement in a revolt against the Luminates and her own magical inabilities/complications. I was surprised to see the middle of the book slow down, too much for my taste. The introduction of some new characters, and a few interesting events take place, so it does pick back up after too long it just seemed like the story line was drawn out a bit.

Overall, and without spoiling too much in this review, I think that Eves did a great job with this debut novel. The historical aspect of it is well done, period clothing and transportation etc. seem to be consistent and I absolutely LOVE that she references various classic literature throughout! I believe there can be some improvement in the development of characters, I haven’t quite decided if the vagueness is just a personal issue that I’m having with it but even in finishing the book I didn’t quite feel connected to Anna at any point. The story although slow at points is well developed, so looking past these few quirks I can say that I truly loved reading this and can’t wait to see more from her!

A complimentary ARC of this book was provided by the publisher in exchange for an honest review.

Have you read Blood Rose Rebellion? If so, what did you think and if you haven’t read it, do you plan to? I truly love your guys’ feedback, so please leave a comment below with thoughts and questions if you have them!