The team at Book Boyfriend Box has done it ONCE AGAIN! April’s theme was “Beauty and the Beast” and every item in the box was curated perfectly. I just want to mention now to be aware of everything following in this post if you have not yet received your box…

You’ve been warned! If you are just curious about this lovely bi-monthly book box, look no further and prepare to be amazed at all of the book boyfriend glory!

END_OF_DOCUMENT_TOKEN_TO_BE_REPLACED 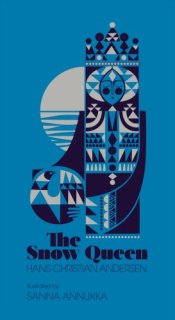 When a boy is cursed with an inability to perceive goodness, a young girl must go on a lonely quest to restore his heart and vision and free him from captivity in the palace of the Snow Queen.

Few works of children’s literature have had as deep and lasting an impact as Hans Christian Andersen’s The Snow Queen, which has won the hearts of young readers for almost two centuries, and inspired works as diverse as Disney’s Frozen and C.S. Lewis’s The Lion, the Witch, and the Wardrobe.

Hans Christian Andersen’s magical tale of friendship and adventure is retold through the beautiful and intricate illustrations of Finnish illustrator Sanna Annukka. Cloth-bound in deep blue, with silver foil embellishments, The Snow Queen is elevated from a children’s book to a unique work of art.

A classic fairy tale that has been retold many times, but the eclectic illustrations in this version help to retell it in an entirely new and magical way!

Much like the old tales of the Brother’s Grimm, Hans Christian Anderson has a way of weaving something terrifying into a magical story that has lived on for centuries after his death. If you didn’t already know this fantastic fun fact, The Snow Queen was the inspiration behind Disney’s Frozen and the character Elsa! Ahhh I love that movie so much, so getting to reread this after so many years was a great experience!

The story is basically this: A young boy (Kay) and a young girl (Gerda) live next door to each other and are best friends. Kay is injured when shards from a mirror pierce his eye, after which is is no longer the sweet and fun little boy that he used to be because the Snow Queen has him under a spell and takes him away. Gerda must go on an adventure to find him, break the curse, and bring him home! There’s much more to it than that, but if you haven’t read this classic then I’d be ruining it for you!

“She is flying there where the swarm is thickest. She is the largest of them all and never remains on the earth, but flies up to the dark clouds. Often at midnight she flies through the streets of the town and breathes with her frosty breath upon the windows; then the ice freezes on the panes into wonderful forms that look like flowers and castles.”

The beautiful language that Anderson uses in his works is just stunning, these stories are so old and so lovely that Christmastime is the perfect time to revisit them!

I received a complimentary copy of this book from Blogging for Books in exchange for an honest review.

Hans Christian Anderson was a Danish author. Although a prolific writer of plays, travelogues, novels, and poems, Andersen is best remembered for his fairy tales. Andersen’s popularity is not limited to children; his stories, called eventyr in Danish, express themes that transcend age and nationality.

You can purchase this lovely special illustrated edition via one of your favorite online retailers below:
Amazon, Barnes & Noble, and Book Depository