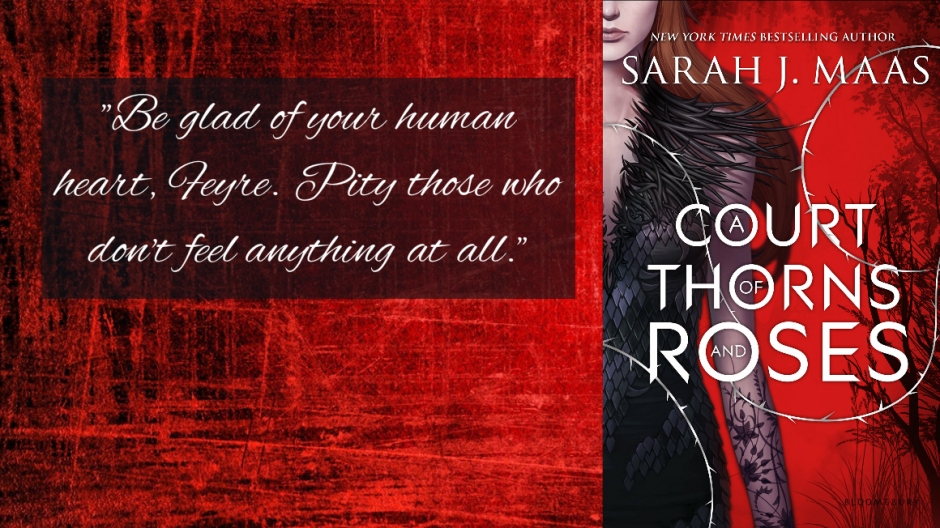 When nineteen-year-old huntress Feyre kills a wolf in the woods, a beast-like creature arrives to demand retribution for it. Dragged to a treacherous magical land she only knows about from legends, Feyre discovers that her captor is not an animal, but Tamlin–one of the lethal, immortal faeries who once ruled their world.

As she dwells on his estate, her feelings for Tamlin transform from icy hostility into a fiery passion that burns through every lie and warning she’s been told about the beautiful, dangerous world of the Fae. But an ancient, wicked shadow over the faerie lands is growing, and Feyre must find a way to stop it . . . or doom Tamlin–and his world–forever.

An impressive reweaving of the classic Beauty and the Beast with it’s own fantastic twist on the enchanting world of magic and faeries. Sarah J Maas did an incredible job creating a world that not for one second did I want to leave for my own reality!

The honest reason that I started this book (it should be known early on that this was my first Maas novel) was because of all the hype that I saw on social media about it and it’s sequel, A Court of Mist and Fury. By the time I came around to joining the Maas fandom, there were already five books in her Throne of Glass series and two in this series. I do own Throne of Glass, but my boyfriend started reading it at the same time I started ACOTAR so I’ll be moving on to that one a few weeks from now. Sometimes I think I have too many books, then I laugh and remind myself that there is no such thing as I run to my bookshelves and start singing merrily while I admire them all in their glory!

I’ll probably lose some bookish friends over what I am saying here, but perhaps it will be understood that I have not yet continued on to ACOMAF (which has been ordered btw, it should be arriving Tuesday afternoon). That seems to be where most of the hype stems from. Rhysand anyone? Maybe I’ll be forgiven.

For all of the hype that this series received, I don’t fully understand what was so fantastic. I only say this because it took almost 100 pages for me to truly be convinced it was worth finishing, and I honestly didn’t even realize that there were traces of a Beauty and the Beast retelling until my bf pointed out the running theme in her books after he read something about it online. Then it clicked. That’s enough negativity, I admit that I became addicted quickly once the story picked up!

The main character, Feyre, is well rounded from the start. Her struggles and upbringing do her no favors, and in spite of those things she blossoms into a very strong female protagonist. Her main concerns are consistently the safety and wellness of her sisters and father, which was refreshing to see. Of course there’s the romance that builds up as the story moves forward, OH THE ROMANCE!! Sometimes I really despise writing no-spoiler reviews because I have so many questions and I need answers 😬 Discussion anyone?

I’d like to see a bit less of the more of the broken and hopeless Feyre, and more of the fiesty and courageous gal that had this conversation:

I was very impressed with the mortal/magical realm(s) that Maas created. The creatures, Fae and Faeries specifically, were unlike anything I’ve read before. There were some completely new aspects to these creatures that I’ve not seen in a story before, but her descriptiveness really brought out the vivid imagery in my mind and made it very possible to picture everything. Of course, at one point I got caught up in fan art on Pinterest too, seeing other people’s renditions of characters is always exciting!

Once I fell for the characters and things started getting a bit more interesting, I couldn’t put this book down. I binge read it in about 3 days (considering I have full-time work and school, that’s the fastest I’ve read a book in years) and I seriously debated for an additional 24 hours whether or not it would be appropriate to revoke my book ban to order ACOMAF, which definitely happened. I’m hoping that ACOMAF is not as slow starting, I truly do have a new outlook going into the sequel even if it is 85% for my excitement in discovering Rhysand and all of his glory that people can’t stop raving about!

Have you read A Court of Thorns and Roses? Tell us what YOU thought about it in the comments below!

This book was provided by SocialBookCo in exchange for an honest review.

Sarah J. Maas is the #1 New York Times and USA Today bestselling author of the Throne of Glass series, as well as A Court of Thorns and Roses and A Court of Mist and Fury. A New York native, Sarah currently lives in Pennsylvania with her husband and dog.

If you haven’t already purchased this fantastic book, follow my custom link to SocialBookCo and they’ll help you find the lowest price via TONS of different retailers!

7 thoughts on “Book Review: A Court of Thorns and Roses by Sarah J Maas”