This fantastic young woman is the up-and-coming author of the science fiction and dystopian Interface series. I was excited when she contacted me, but I must admit that I was slightly hesitant to pick up this novel because these genres are a bit out of my comfort zone. I am very pleased that I took the plunge into her dystopian world of advanced technologies and sarcastic, unlikely heroes because it opened up my eyes to an entirely new type of reading that I just may pursue further (if I ever have free time again *lol*)!

Make sure you check out our January Giveaway at the bottom of this post and enter to win a copy of Interface along with two other great novels!

If you’d like to know more about Interface, read the synopsis and our full review here!

TRB Book Blog: The dystopian theme/setting seems to be becoming a bit more popular, although it still seems to be a fairly difficult and somewhat controversial topic to write about. What got you interested in the genre?

Lucy: I love dystopian fiction, but whenever I read a story set in a post-apocalyptic wasteland, it makes me wonder how we let things get that bad in the first place. How did we let a totalitarian regime come to power? How did we let North America become Panem? Is it just North America? How’s the rest of the world doing? I bet they’re fine. I bet they’re making memes about us.

I decided to tell that story. I just didn’t realize how hard it would be to write dystopian fiction after 2016. I can raise my carpal-tunnel-ridden right hand and swear to Godiva that I wrote about chocolate shortage before I found out it was a real thing (a global decline is due by 2020) and that I made the president in my book a reality TV star before Trump threw his toupee in the ring, but he’ll still get the credit. Probably not for the chocolate shortage, but I wouldn’t put it past him.

TRB Book Blog: Were there any authors or specific novels that inspired you during the
writing process?

Lucy: One of my favorite books is Ready Player One by Ernest Cline. It’s set in 2044, so it’s less post-apocalyptic and more mid-apocalyptic. The Big Bad isn’t the government or a religious organization. It’s a corrupt video game company (cough, Oculus Rift, cough).

TRB Book Blog: Your main character, Pen, seems to have the perfect combination of witty, sarcastic humor and an understanding of things much deeper than meets the eye. Do you find any of yourself in her?

Lucy: I’m actually a lot more like Sol than Pen. He’s a sixty-year-old chain smoker, but he likes Disney movies, pancakes, and bad puns, which basically makes him my spirit animal.

TRB Book Blog: Interface was such an excellent debut novel, can we expect the next volume from you soon? Are there any tidbits or sneak peeks that you are willing to share?

Lucy: Thank you very much! The second and third books in the trilogy are already written, so they should be coming out over the course of the next few years. There’s not much I can say without giving anything away, but if readers want a sneak peek, the first chapter of Operation Clippit is included with Interface.

TRB Book Blog: In our conversations, you’d mentioned that you had faced some difficulty in the publishing process of this novel. What would be your advice to aspiring authors who may be facing the same or similar issues?

Lucy: It might be worth considering self-publication, which has become both more accessible and more accepted since the days of vanity presses. It’s a lot of work, but the hardest parts of writing a book are marketing, accepting critique, and actually writing the damn thing, all of which we have to do ourselves anyway.

I tried publishing Interface traditionally first. I got an offer of representation from my first-choice literary agency, but the agent asked me to add romance because she believed it was “crucial to keep readers invested.” The main character is asexual and aromantic. When I refused to make my book a romance novel, the offer was withdrawn. I decided to try Kickstarter, where it was 122% funded. 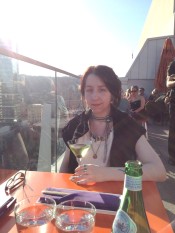 Lucy Mihajlich lives and writes in Portland, Oregon. She’s very popular on the internet, or at least on her mother’s Facebook page. Interface is her first novel.

This books is available for purchase via Amazon.

Don’t forget about our January Giveaway happening right now (you have 4 days left to enter) and you have the opportunity to win THREE fantastic books including Interface by Lucy Mihajlich! Click the link above, or the image below to be taken to the original post for all of the rules and details!

One thought on “Interview with Lucy Mihajlich, Author of Sci-Fi/Dystopian novel “Interface””