This month’s theme is Best Book with an Active War and let me tell you what, it was more difficult challenge than I thought mainly because I haven’t read any war-themed books as of late. If I am being entirely honest my pickings were extra slim since I haven’t gotten to the good bits in the Throne of Glass series yet *crying* which I assume have war themed content. I think the obvious choice here would have been ANY of the Lord of the Rings trilogy, but as ashamed as I am to say this…I haven’t actually read them. I love the movies, and have read The Hobbit if that counts for anything. So for good measure here is an awesome LOTR gif because Aragorn is bae and the films are amazing.

I’m going to take some liberty here and finagle this month’s theme a bit because the book I’ve chosen is the last in a trilogy and is themed around an active political war rather an active battle/war scene which is what I think was meant for this? It’s been a few years since I’ve read this series, but my love and adoration of this author’s excellent work has not faltered! 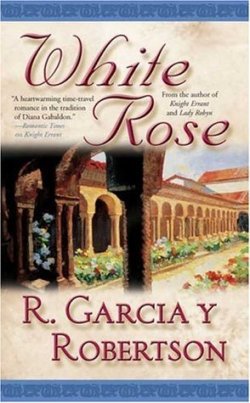 White Rose is the third book in the romantic historical fiction time-travel trilogy based around The Wars of the Roses in 15th century England. I’m using the third book for this prompt because the first two are centered more around the romance and adventure rather than the war at hand and didn’t quite fit what I had in mind here. Although the war in these books is more politically based, there are quite a few minimal action scenes and TONS of references to the families involved and descriptions of the actions that each side has to take to make their stand throughout the process. The reasons I love and chose this book in particular were:

1. I haven’t read many other war themed books lately (shame on me, I know)
2. The author does a fantastic job of providing accurate historical information about the real Wars of the Roses while managing to weave an incredible fictional story chock full of romance, adventure, witchcraft, and modern quips.
3. Who doesn’t love the thought of knights and earls marching off into battle mounted on gorgeous steeds and fighting for their country and people’s rights to freedom?

Okay really though, I absolutely love historically themed novels and this is such a great one! The entire series is really, but I don’t want to spoil anything for anyone. Here’s a little tidbit about the real Wars of the Roses to help move this along and prove that I’m not all crazy in choosing this book for the theme:

Instead of posting the synopsis for this book since it is the last in the trilogy, I thought I’d include the synopsis of the first book, Knight Errant, instead. If you like Diana Gabaldon (author of the Outlander series), I’d be willing to bet money that you will love these! 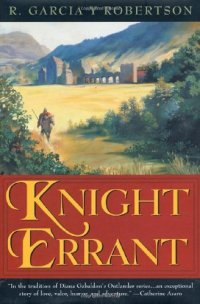 Robyn Stafford, a young American woman executive, has flown from Hollywood to England to surprise her lover on his birthday, only to find that he’s married and his wife’s giving the party. So she takes a few days off to recover from her outrage and dismay, traveling and hiking in England near the Welsh border. There she encounters a young man on horseback, wearing a sword, chain mail, and a surcoat, who identifies himself as Edward Plantagenet, Earl of March, and asks directions to a nearby abbey. He thinks it is the year 1459, is amazed by her working cell phone, and invites her to ride along, although at first he thought her a young boy wearing pants! Then his pursuers show up, and Edward and Robyn ride madly across the hills until he drops her off and gallops back to face his enemies. After he fights them off, he returns and invites her to come with him and be his lady. Then he rides away, into the distant past, to the age of the War of the Roses.

And so Robyn Stafford must find a way to leave the world of today for the fifteenth century, where she will fall in love with a young knight, a prince who will be king. This is the first of three books in a sweeping historical romance.

Flavia the Bibliophile – J.R.R. Tolkien’s The Return of the King

Have you read this book/series? If not, now that you know about it do you plan to read it? Are you a participant in the Calendar Girls event? Whether or not you are, please feel free to comment your thoughts and any questions you might have and I would be thrilled to chat about this post! Thanks so much for taking the time to read my blog!

9 thoughts on “Calendar Girls – Best Book With an Active War”

There was an error retrieving images from Instagram. An attempt will be remade in a few minutes.